I just cannot even believe that you are already 11 months old.  Time is flying!  This last month of your life has been extremely eventful.  On your 10-month birthday, we flew to Utah and stayed for three weeks.  Your dad and I expected you to change a lot while we were in Utah, but we had no idea just how much it would actually be. 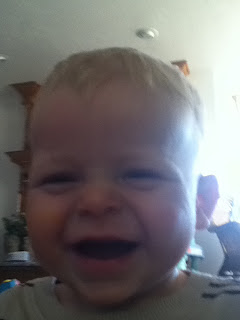 Within the first three or four days in Utah, you had two teeth break through!  They were your very first teeth.  I wish I had a picture of what they looked like.  One is a side tooth, and the other is a middle tooth with a space in between.  You like kind of funny, but oh so cute! 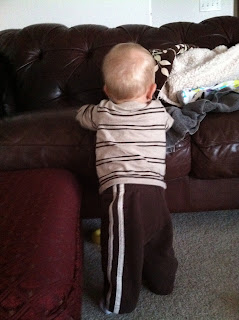 You also started pulling yourself up to a standing position.  I knew it wouldn't be long until you were finally crawling and walking.  By the end of our trip, you were crawling all over the place. 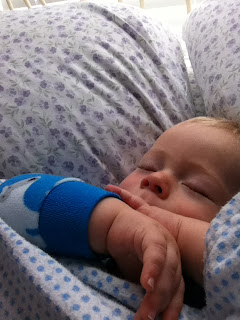 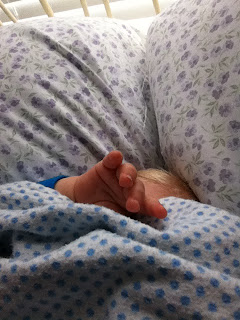 This last month has definitely brought a lot of change in your life and by the way you are acting, it seems there will be a lot more change in the near future.  I can't believe how fast you are growing up.  You are even sleeping like a big boy too.  You no longer want to be swaddled (finally).  You always loved having the blankets tight around you, but now you just want to be able to roll around and sleep on your tummy.

One more month and we get to celebrate your first year of life!  We are going to have a grand party for you. Elliot, I sure do adore you.  You make me so happy!

Posted by Hone Family as in Ryan and Ashley at 9:42 AM No comments:

Do you love to try samples of new products?  I love it.  Ryan thinks I'm kind of strange, but whatever.  It takes me back to being a kid and running to get the mail only to see a sample of some sort of body wash or shampoo.  It would inevitably make my week.

Well, if you have always liked it, you should try out Smiley 360.  It's a site that sends you on "missions."  They send you samples of different products with coupons and other sharing tools.  You then try it out and share your experience to earn points.

Click HERE to try it out for yourself!  I'll also be posting about the products I've been able to try.
Posted by Hone Family as in Ryan and Ashley at 10:39 AM No comments:

I received a call late one Wednesday night from my father.  He informed me that my grandfather had taken his last breath and passed on to the next life.  I was alone seeing as how my husband had spent the night in Los Angeles (the only night that week he stayed there).  I was in slight disbelief that grandpa was gone and nobody was there to cry with.  We had known it was coming, but yet I kind of thought he would just keep holding on and never leave.  I wish that was how it could be.

Thursday was riddled with phone calls and texts to and from family members.  My brother so graciously booked a flight for me and the kids for Friday, March 22.  It was fast and crazy.  The thought of having to fly with two kids two and under scared me.  However, my little troopers did amazing on the flight.  It was like they knew I needed them to behave and help me out.

Grandpa had been a fireman for quite a few years of his life.  I remember going to the fire station when I was a kid and getting scratch and sniff stickers (orange scent) and thinking he was such a cool guy.  He was.  The fire department literally stood by his side until the very end. 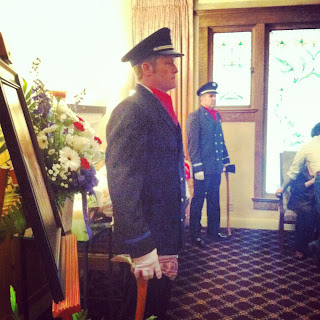 It was so touching to see the firefighters dressed in their blues, stoic, and holding their axes.  A final farewell.  They led the casket into the funeral services too.  It was amazing.  Breathtaking really.  A fire truck led the way to the cemetery.  It had black drapes on it and carried the great grand kids.  It was such a special thing for those little ones.

While following the hearse, we came around a corner in Provo to such an amazing site.﻿ Two fire trucks with their ladders extended and all the firemen standing next to them saluting as we all passed by. 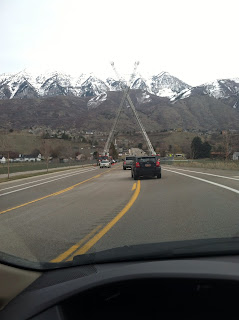 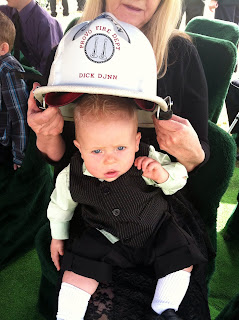 Little Elliot decided to try out being a firefighter for a minute. 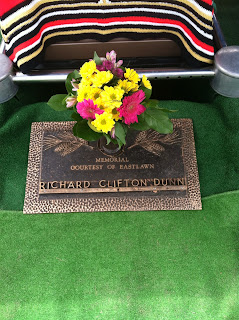 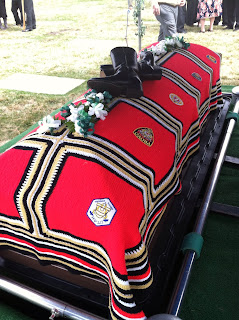 Did I mention I was a pallbearer?  I was.  That's right.  I, in all my wimpy glory, carried a casket.  Granted I did have 8 other people helping me.  I felt so blessed to have had such an opportunity. 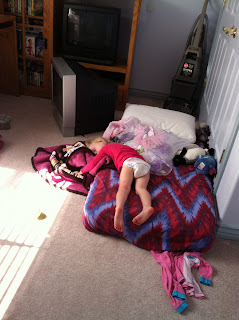 The day after the funeral, Scarlet decided she needed to get sick.  I mean, knock down, drag out sick.  I couldn't get her to eat or drink.  And then the diarrhea.  It was AWFUL.  She has never, ever in her entire life been that sick.  I felt so bad for her!  However, I did love the snuggles.  I never get to snuggle her, so it was a nice change.  Too bad she was sick. 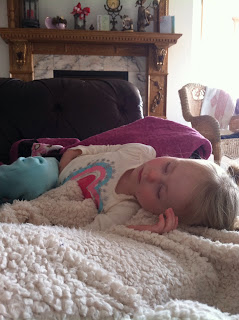 As Sunday morning rolled around and she was still not eating, drinking or going potty, I decided it was time to take her to the emergency room.  The nurses and doctors at UVRMC were nothing short of amazing.  They were so good with Scarlet.  They brought toys, socks, drinks, suckers, rice krispie treats, yogurt, cereal, fruit snacks, and I'm sure other stuff that I left out. 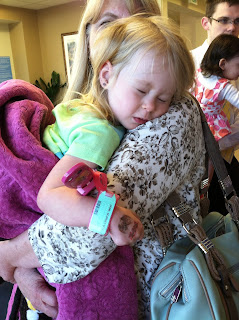 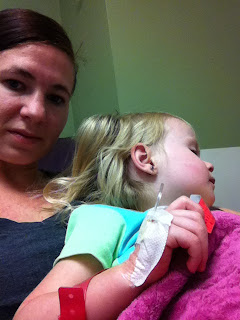 She ended up with an IV in her tiny little hand and got some hydration.  The doctor just about admitted her.  I was praying he didn't because it was Easter and I just wanted her to be with her cousins and have fun, even if she could only do it in short spurts.  Thankfully the doctor let us leave.  We just had to keep her IV in just in case she needed more hydration.  Poor little thing.

After a week of sickness, things got better.  For the last week in Utah, we tried to party it up.  We went to story time at the Provo library (best story time), ate at Waffle Love (a.k.a. the waffle truck, delicious), and went to dinner with friends and family.  I only wish we could have extended the healthy week a little longer.  It went by way too fast.

The flight home was decent.  The kids did okay.  Elliot started crawling the day we came home from Utah, so he thought he needed to be up and about during the flight.  Scarlet thought the tray table was the coolest thing she'd ever experienced.  Oh, and the fact that they gave her apple juice made her super happy.

Also while we were there, Elliot got two teeth!  It was crazy.  One tooth one day, another the next.  They were his very first teeth.  He hit huge milestones and grew so much in just three short weeks.

I was so grateful to have been able to get back to Utah for the funeral and spend some much needed time with friends and family.  I'm counting down the days until Ryan is finished with school.  It's coming very soon!  I will always have great memories of this time in California, but I'm so ready for an income.
Posted by Hone Family as in Ryan and Ashley at 7:39 PM No comments: