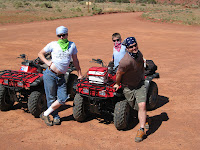 Moab was amazing. I think we often take Utah for granted. There is such beauty here that we just don't take advantage of. As we were getting ready to leave on Thursday evening, the skydiving people called us and told us the guys couldn't go skydiving because one of their planes got blown over in the wind. We were very angry. This was the whole reason we were going to Moab. 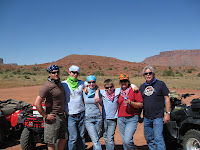 Well, we decided to go and have fun anyway. We loaded up the truck and off we went. Six of us in a truck. What an experience! The first day in Moab we took the 4-wheelers to Onion Creek. What a great ride! You cross the creek 27 times. By the time we were done we were soaking wet. It was 118 degrees down there so the water felt really good.
Thank goodness the skydiving people changed their minds. 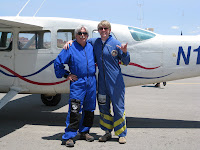 The guys ended up going skydiving, just not when we had originally planned. We waited all day Saturday for the plane and jumpers to be ready and finally around 3:30 dad and Ryan got to take off. The plane was in great shape! Not ready to fall apart at all. It was very tiny and very scary. I was a little nervous for them, but they seemed just fine with a crappy old plane. I think they were so nervous at that point they didn't care what the plane looked like. After all, they were attached to a parachute. What's the worst that could happen? 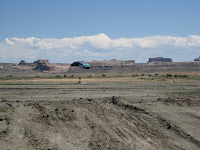 Well, all 3 guys made it safe to the ground after a short fall from the sky. 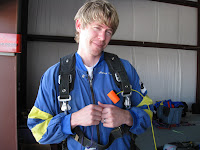 They were like little screaming blueberries. Ryan, what a funny guy! Ryan and Josh had the same tandem jumper. 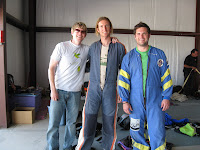 That guy must have been exhausted! I watched him jump 4 or 5 times that day.
Well, we had a great time. We all lived without injury, only a few bug bites and sunburns.

Posted by Hone Family as in Ryan and Ashley at 7:26 PM 11 comments: 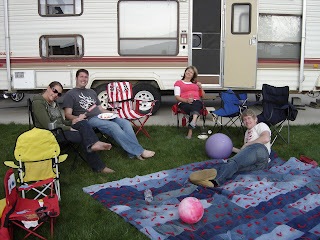 So, I haven't posted anything for a while because our lives have been crazy busy! Since Memorial Day got snowed out we camped in front of my parents house in their trailer. Can we get anymore white trash? 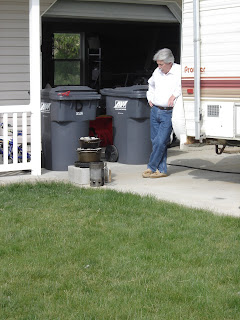 We even did dutch oven turkey with veggies and also a cherry cobbler. My favorite! Memorial Day in Elk Ridge. What a way to spend the holiday! It actually was a lot of fun. We stayed up late and listened to scary stories. 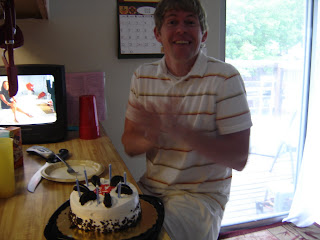 Next came Ryan's birthday. The love of my life turned 29! Holy crap! 29 years old! I'm still in denial that we have to get older. I got him an ice cream cake from Cold Stone. He also gets to go skydiving this week for his birthday. It's a late birthday gift. Look at his hands in this picture. You can see his excitement over blowing out his candles. 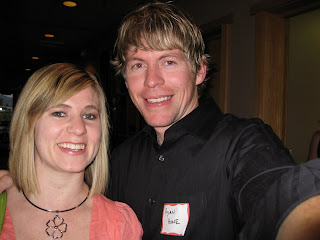 Then came Ryan's high school reunion. What a fun day for me! It was really good to see all of our friends we don't get to see that often. 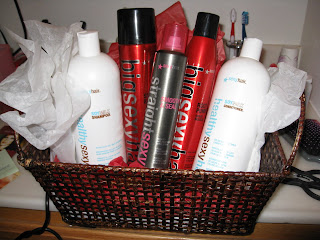 We went to the carnival in Springville and I entered a raffel for some salon in Springville. Look, I won! Now we won't have to buy shampoo for a really long time thanks to The Retreat Salon!
Get excited! This is the weekend for the skydive! I'm freaking out way more than the people who are actually jumping. Watch for those pictures.

Posted by Hone Family as in Ryan and Ashley at 8:59 PM 4 comments: