Well, you are now 8 months old.  I'm still in shock that you are that old already.  We are getting closer to your first birthday and you better believe I've already started thinking about the theme for your party.

Over the last month we traveled to Utah for about 10 days and then back to California.  On our way back to California, we got stuck in traffic.  I think we were going about 5 miles an hour.  If that.  We decided to pull over in Primm, Nevada and let you and Scarlet have a break from being in your car seats.  You loved it.  I let you sit in the driver's seat and you were just smiling and laughing.  That's your typical countenance, but you were exceptionally happy at that moment. You are just growing up way too fast!  You are a pro at sitting up at your own now.  I think within a few more weeks you should be getting ready to crawl.  That scares me a little.

We just moved you to a bigger car seat since your infant seat was too  heavy for me with you in it.  You absolutely love your new seat.  You can watch your sister and you two giggle at each other as I drive down the street. 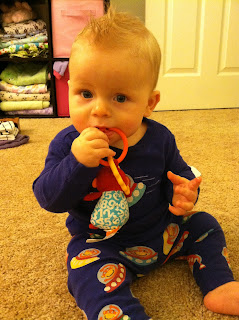 You adore Scarlet.  However, I'm not sure she feels the same way.  She does love you, you just occupy my attention which in turn makes her upset.  Apparently I need to be cloned or something so I can provide enough attention and one-on-one time for both of you.  I try my best to make sure you know that you are loved though.  You are.  You're amazingly wonderful! 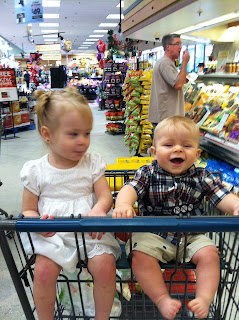 Little Bubba, I hope you always know just how special you are.  You have brought such a light into my life and I'm beyond grateful to have you.... even if you still won't sleep through the night.  Keep smiling and laughing!

p.s.  It would be okay if at this point in your life you wanted to start saying, "mama."  Just saying.

Posted by Hone Family as in Ryan and Ashley at 6:22 PM No comments:

Happy 29-month birthday! Today is a significant day in your life as well as mine.  This is the day, January 11, three years ago when you were transferred from a petri dish, or whatever medium you were in, and into my belly.  In other words, it was three years ago today I became pregnant with you.  That was truly a very special day and one I won't forget any time soon.  I watched on a screen as the scientists sucked you up into a little beaker in the lab.  They brought the little tiny pipette with you in it into my room and you were handed to the doctor.  Then, wah, lah!  I was pregnant.  Yep, something like that.

The last three years have FLOWN by.  I remember holding the picture of you in your embryonic form and dreaming of what you would look like and who you would be.  I also wondered about the other little mass of cells and would it would turn into.  That was Kingston.  You were both amazing little miracles and I'm grateful you came into our lives.

It's amazing to me what can happen in three years.  The last three were the most eventful of my life.  By far!  I got pregnant with you, gave birth, buried a baby, moved, got pregnant, gave birth.... and everything in between including multiple trips to Disneyland and Utah.  I'm sure the next three will bring lots more joy into our lives!

Love you always!  I'm so glad you're mine.