Oh, one of THOSE mornings


The alarm goes off at 6:15 and for some reason the Ambien you took the night before is still causing a hangover, so you just don't think you can get out of bed, but yet you know you have to be clocked in and have an e-mail sent out by 7:00 from your office at Mountain View Hospital in Payson? You finally roll out of bed, stagger to the bathroom, let the dog out and turn the light on only to realize you look like hell? Put on your make up, brush your teeth, tell your husband goodbye, grab your purse and coat and head out the door into utter darkness. You quickly realize that not only is your car frosted over, but you're totally blocked in the driveway by 2 other vehicles. FUN I say! You quickly think, "oh, I'll start my car and get it defrosting while I move one of the others." Start your car and then go to get some other car keys and quickly learn the front door is locked and the only way you can enter is with the keys that are running your car. Sigh. So, you turn off your car, unlock the door and enter the house all while trying not to wake anybody up. Grab the first set of keys you see, run back outside and get into one of the cars blocking your way out of the driveway. Ah, ice all over the windows. Again, fun! You think, "oh, I'll just roll down the windows and back up. I don't have that far to go." Haha. Have you ever tried that? Down with the windows, no headlights on, backing up, pulling forward and guessing where the curb is. Guessing being the key word. Attempt to roll up the frozen window to quickly learn it does't roll up when it's frozen. Grab it, pull it, roll up, roll down, roll up, roll down, all while freaking out you're going to be late for work. Finally get the window up, get out of the car, realize you're 3 feet away from the curb and totally in the road, not care, because you're going to be late, and heaven forbid you be late, and leave the car in the middle of the road. Run to your still frozen car, start it up, no time to scrape the windows, turn on the defrost full blast, squirt the windshield and wipe it and hope it doesn't freeze over and ta dah! You're off! Backing out of the driveway only to be quickly stopped by a big heavy object. **Expletive** That's right, you totally just hit into the other car blocking your way in the driveway. More of a "buddy bump" I'd say. Good thing you were only going backing up speed right? You decide to roll down all the frosted windows and back up so at least you can see out the side windows at this point. You look once again at the car in the middle of the road and hope it's okay, and drive off full speed ahead. Run one stop sign and fly down the street all in hopes of making it to work on time. It's now 6:44. You have 16 minutes to get from Springville to Payson, in the hospital, turn on your computer, and get an e-mail sent out. No way it's happening. Not today. On your way to the freeway the entire journey is red lights and road construction. Seriously, the entire way.


Have you had one of THOSE mornings? Yep, this was mine this morning. I really love working from my home most days. I'm just not cut out for waking up early and driving in the freezing cold to my office. Thank goodness this is not a permanent arrangement. I did end up clocking in by 7:02, so not too bad considering the circumstances. I ended up calling Ryan at 7:00 and told him to go get the car out of the middle of the road before somebody hit it.
Posted by Hone Family as in Ryan and Ashley at 9:05 AM 6 comments: 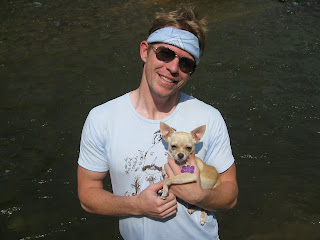 September was quite a beautiful month. I've always loved September, whether it's because that's when I celebrated my birthday or because fall was just around the corner, I'm not sure, but I just love it. Ryan started his last semester in the nursing program. It's been interesting going from having him here everyday all day to being gone most days all day. He seems to really be enjoying the ICU at Utah Valley. He always comes home so excited about what he did that day. I'm so proud of him. 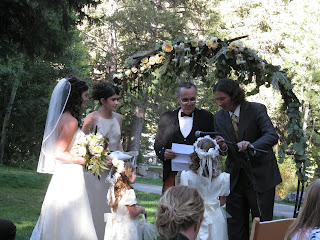 We got to attend our friend's wedding (Garrett and Shannon) up at Sundance. It was absolutely beautiful. I enjoyed every minute I was there. The ceremony, watching their wedding video in the screening room, and a very yummy dinner. 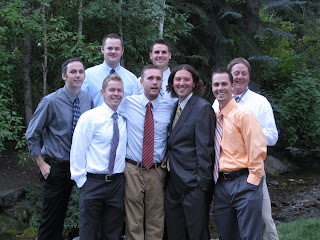 Congrats Garrett and Shannon! Here's all of the guys, all of Ryan's high school friends, who attended the wedding that day. Aren't they handsome? 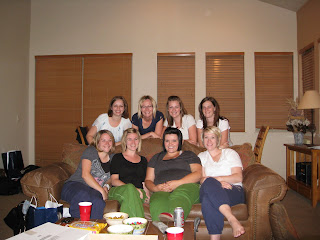 Next came the annual girl's weekend in Park City. I always look forward to this. We stayed at Crestview Condominiums right by the outlets. I spent way too much money, but as always, had the time of my life. We ate lots of good food, got pedicures, enjoyed each other, laughed histerically until I thought I was going to throw up and/or pass out, ate McDonald's at 11:00 at night (do not recommend), ate more food, shopped, ate food, shopped, etc. We would stay up until 3:00 in the morning laughing at our most embarassing stories. Oh how I love these ladies.
That's it! There's our September in a nutshell.
Posted by Hone Family as in Ryan and Ashley at 6:19 PM 3 comments: